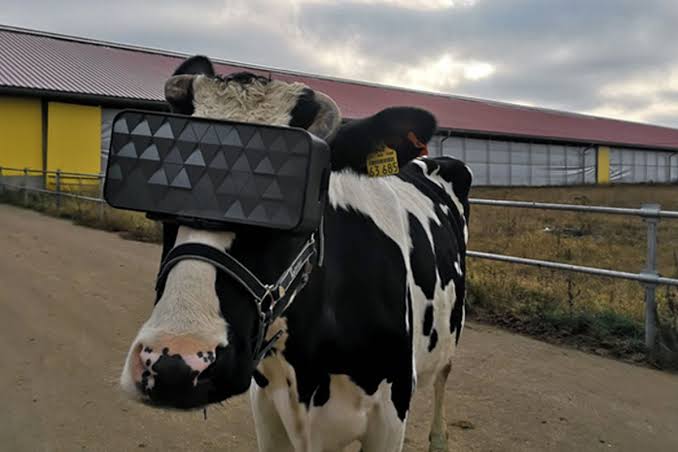 VR Headsets for the Mental Health of Cows

Experts used to worry that virtual reality (VR) would damage our brains. These days, however, VR is being pioneered to diagnose and treat medical conditions from social anxiety to chronic pain and Alzheimer’s disease.

VR technology is being tested in a number of mental health care settings. Here in Australia, VR immersive experiences are outperforming video platforms like Skype for mental health services. In the United States, researchers are using VR to diagnose and treat veterans suffering from post-traumatic stress disorder. And in Russia? Well, it’s all about the cows…

VR for the mental health of cows

As a diagnostic tool, VR potentially offers some big advantages. It can create convincingly realistic simulations of experiences and can be used to immerse patients in an exterior environment or distract attention away from a harsh environment. It’s this latter benefit that has a team of Russian researchers excited for anxious cattle.

This week, the Moscow Ministry of Food and Agriculture confirmed in a press release that a VR headset prototype has been specially made to fit the proportions of a cow’s head. Inside the VR goggles are visions of a “unique summer field simulation”, which take them away from the fact they are actually standing in a cold, wintry field. Not only does this calm the cows down and reduce anxiety, it ultimately makes them produce more milk and milk of better quality.

For the summer environment the cows are immersed in, the designers opted for a warm and predominantly red colour scheme. Studies on cattle vision have shown that cows perceive the red part of the visible spectrum better than others and that red is linked to good emotional wellbeing.

Reports from the initial deployment have been positive.

Image credit: Ministry of Agriculture and Food of the Moscow Region